Obama and the art of compromise

Drill, baby, drill. Along "vast" stretches of the Atlantic coastline of the US.

The proposal — a compromise that will please oil companies and domestic drilling advocates but anger some residents of affected states and many environmental organizations — would end a longstanding moratorium on oil exploration along the East Coast from the northern tip of Delaware to the central coast of Florida, covering 167 million acres of ocean.

That's how the New York Times defines compromise. Please the oil companies and the politicians in their pockets, anger the residents and environmentalists. Can't please 'em all!

Your company introduces a car priced at Rs 1 lakh (US$ 2500) and becomes internationally famous. A few months after production starts, a customer's brand-new car goes up in flames on the way home from the dealer. The family is too traumatised to consider buying another car. How do you react?

"We regret the inconvenience" -- hm, seems a bit inadequate.

"I fell off a bicycle when I was a kid, but later rode it, overcoming my fear" -- not an improvement.

I'm waiting to see where it goes from here. For me, the good name of the Tatas -- and it was a very good name at one time -- has been permanently tarnished by Tata Indicom (I'm a former customer) and Tata Motors (I'm not a customer but never seem to hear good things about their vehicles); and especially by their antics in Singur and Ratan Tata's subsequent cosying up to the butcher of Gujarat.

Odds are, it's wrong

That's the title of a very interesting article at Science News, arguing that bad statistics is the dirty secret of science. I believe it is.

Though there is an entire field of physics called "statistical mechanics", the statistics there don't go beyond the 19th century. To this day, physics undergraduate and graduate programmes cover statistics minimally, or not at all. Perhaps it seems unimportant to theorists, but it is crucially important in testing hypotheses, which is what experiments claim to do. Or perhaps hypotheses in physics are sufficiently clear-cut, and experimental data sufficiently clean, that sophisticated hypothesis testing is not necessary.

In other fields, hypotheses are murky and plentiful, data are noisy and ambiguous, but the practitioners are still ignorant of statistics. When the field is medicine, and the question is of new drugs or therapies, it is a crucial matter.

Famously, Sir Roy Meadow -- creator of the discredited "Munchhausen syndrome by proxy" hypothesis -- sent several mothers to jail with his expert evidence based on bogus statistics. The consequences of bad statistics may not always be equally bad, but if the medical literature is as riddled with them as recent articles suggest, the cumulative effect may be worse than anything Meadow did.

But bad statistics in the medical literature is just the starting point: there are problems throughout the practice of standard medicine. This is why, though I respect mainstream medicine and regard much "alternative medicine" as fraudulent and the rest as of very limited (and unvalidated) applicability, I was sufficiently annoyed by this post by Orac to leave this comment. (See also other comments there on dubious practices in the health industry.) I think Orac does, in theory, a great service by pointing out peddlers of pseudoscience and exposing their ignorance and, often, fraudulence. In practice, he preaches to the converted and, I suspect, antagonises nearly everyone else.

Airtel wants me to chat with young boys and girls 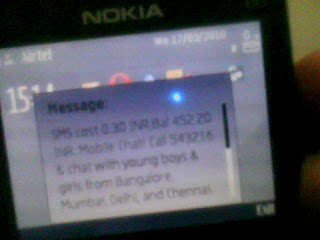 I saw this message after sending a text from my Airtel mobile. Words fail me.

In case the text is unreadable, it says: "SMS cost 0.30 INR Bal 452.20 INR. Mobile Chat! Call 543216 & chat with young boys & girls from Bangalore, Mumbai, Delhi, and Chennai." It continues, if you scroll down, "Charges at Rs 2/min." The blue dot is the light of my computer's webcam -- the only available device I had to capture the message before it vanished.

Maybe I should give Airtel the benefit of the doubt and assume they're not promoting paedophilia -- but it sounds plenty sleazy regardless. But, just in case they are promoting paedophilia, I'm alerting some activists, as well as putting up this blog post.
Posted by Rahul Siddharthan at 3:18 pm 3 comments:

I have previously posted on monopoles and on homoeopathy, so it is only fitting that I post this gem of a scholarly paper. (Seen on Orac)

In previous articles by this author and his colleagues in the Journal of Alternative and Complementary Medicine, it has been shown that physical reality consists of two uniquely different categories of substance, one being electric charge–based while the other appears to be magnetic charge–based. Normally, only the electric atom/molecule type of substance is accessible by our traditional measurement instruments. We label this condition as the uncoupled state of physical reality that is our long-studied, electric atom/molecule level of nature. The second level of physical reality is invisible to traditional measurement instruments when the system is in the uncoupled state but is accessible to these same instruments when the system is in the coupled state of physical reality... Part II of this article (in a forthcoming issue) explores the thermodynamics of complementary and alternative medicine (CAM) through five different space–time applications involving coupled state physics to show their relevance to today's medicine: (1) homeopathy; (2) the placebo effect; (3) long-range, room temperature, macroscopic-size-scale, information entanglement; (4) explanation for dark matter/energy plus possible human levitation; and (5) electrodermal diagnostic devices.

Yes, that's exactly what was missing in the physicists' picture: "a coupled state of physical reality." (Needless to say, Maxwell's equations, which suggest that a magnetic monopole -- if it existed -- would be rather easy to detect, must be wrong too.)

Posted by Rahul Siddharthan at 8:47 pm No comments: