When my brother and I were growing up in Delhi, among our closest friends were our neighbours the Mukhopadhyay brothers. Each was a year junior to us, and it would seem natural that the elder siblings would form a close friendship and the younger would form a close friendship too. But the closeness extended with all pairs. Though the age gap between the oldest (me) and the youngest (Arpan Mukhopadhyay, a.k.a. Ali) was five years -- a significant difference when you are ten and five respectively -- we had a great deal of fun together. We ceased to be neighbours when Ali was in his teens, and I left Delhi soon after, but the memory of watching him evolve from an impossibly cute child to a somewhat problematic student to a talented footballer to an extraordinary artist remains fresh. And the memory is all that remains. Ali died, shockingly, in January 1999 at the age of 20, leaving behind bittersweet memories and several astonishing canvases.

Now, almost ten years later, Ali's parents, brother, family and well-wishers have brought out a book, "Ali's World", published by Roli Books, available online here and soon to be available at bookshops across India, consisting of biographical notes and memories interspersed with nearly four dozen of his artworks. As part of its release, they are holding a two-day exhibition of 28 of his works at the India Habitat Centre, Delhi, on July 26 and 27, 2008. (I am typing this after having attended the first day.)

Looking through the exhibition and the prints in the book brought home to me, once again, what this young man had achieved at twenty. But I am probably too close to the picture to see it objectively, so let me quote an unbiased judge instead:

When I see Ali's work I am mesmerised. I feel moved by what I see. His paintings engage and enrich me... I just loved his work. It gets you in the gut and speaks to you, moves
you.

So says actor and director Aamir Khan, in the foreword to the book; he clarifies that he had this reaction on first seeing the pictures, before knowing the personal story of Ali.

Why did Aamir Khan write the foreword? There one needs to get into the personal story. As I said above, Ali had a problematic childhood in many ways: partly his propensity to get into innumerable accidents (though nobody could have foreseen the one that eventually claimed him), and partly his very erratic performance in school: a mixture of immense talent and mediocre results. As his parents say in the book, though he was eventually diagnosed with dyslexia, awareness of such problems was not as common in those days as now. Thankfully, they followed their instincts in letting him choose his own path in life.

When this book was nearly ready, they say, they watched Aamir's movie Taare Zameen Par and were immensely moved by the story of a dyslexic child who is encouraged by his teacher to become an artist. "On an impulse", they sent Aamir a pre-publication copy of the book. Though he gets vast quantities of such unsolicited material, something about these paintings struck him, and on reading the text, he responded by writing the foreword.

Reading the text of the book was a little disconcerting: it showed me how little I really knew Ali in some ways, and how much his parents had to contend with in bringing him up. But at the end of the day it is an inspiring story -- not just to me, but, I think, even to those who never knew Ali.

I will upload a couple of images of the paintings, that I snapped at the exhibition today, when I get a chance. But if you read this early enough and are nearby, do try and make it on the second day: July 27 at the Convention Foyer of the India Habitat Centre, Lodi Road, New Delhi.

UPDATE: Pictures from the exhibition. 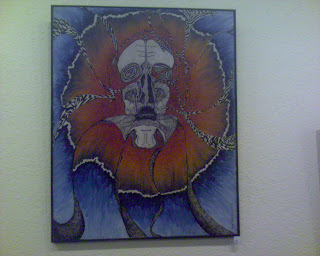 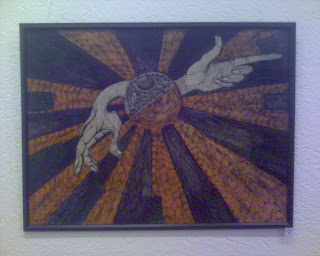 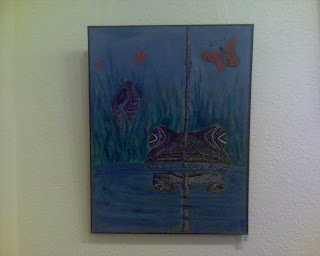 "Believe me, it's torture"

At the request of Vanity Fair editor Graydon Carter, Christopher Hitchens (one of the most consistent cheerleaders of the Iraq war and the Bush regime) undergoes "waterboarding", a technique being used by the Bush regime who claim it is not torture. His conclusion? "Believe me, it's torture."

You may have read by now the official lie about this treatment, which is that it “simulates” the feeling of drowning. This is not the case. You feel that you are drowning because you are drowning—or, rather, being drowned, albeit slowly and under controlled conditions and at the mercy (or otherwise) of those who are applying the pressure. The “board” is the instrument, not the method. You are not being boarded. You are being watered. This was very rapidly brought home to me when, on top of the hood, which still admitted a few flashes of random and worrying strobe light to my vision, three layers of enveloping towel were added. In this pregnant darkness, head downward, I waited for a while until I abruptly felt a slow cascade of water going up my nose. Determined to resist if only for the honor of my navy ancestors who had so often been in peril on the sea, I held my breath for a while and then had to exhale and—as you might expect—inhale in turn. The inhalation brought the damp cloths tight against my nostrils, as if a huge, wet paw had been suddenly and annihilatingly clamped over my face. Unable to determine whether I was breathing in or out, and flooded more with sheer panic than with mere water, I triggered the pre-arranged signal and felt the unbelievable relief of being pulled upright and having the soaking and stifling layers pulled off me. I find I don’t want to tell you how little time I lasted.

This is because I had read that Khalid Sheikh Mohammed, invariably referred to as the “mastermind” of the atrocities of September 11, 2001, had impressed his interrogators by holding out for upwards of two minutes before cracking....

And here's the video.

Incidentally, even while cheering the war Hitchens has previously spoken out against torture, for example here. But it seems to me that his language then was deliberately obscure and clouded with rhetorical and irrelevant questions. (I say "deliberately" because he is a master of prose and certainly knows how to make his meaning clear when he chooses to.) This time, he couldn't have put things more plainly.

More on the Pen Pricks

An inside look at the "Johann Bach" hoax is here. Very nicely done.

The fake "press release" that conned almost the entire Indian media is linked there, and I can't believe anyone fell for it. Leaving aside the amateurish logo, the suspicious names, the bumpy language and so on, here's a minor detail on the top right of the letterhead: the address of the police, which they say is "a slight variation of the official address of Berlin police":

Yes, that's a slight variation -- of the address of the police at Berlin, Vermont. (Says so right there, if you're familiar with US state abbreviations.)

Via Abi, here's Siddharth Varadarajan's take on the affair. He notes that "Even if the journalists did not know there was no concentration camp with the name ‘Marsha Tikash Whanaab,’ a quick search on the Internet might have at least triggered a warning light", and sanctimoniously lists the several media organisations that failed to perform such a check; but he omits the story from his own newspaper, who, though it (to its credit) displays some skepticism, does not seem to have benefited from the quick Internet search he suggests.

Man rescues abandoned bear cub and brings her up with his daughter. Man put in jail. cub put in jail zoo. Way to go, forest department.
Posted by Rahul Siddharthan at 7:48 am 2 comments: