A tale of two shoes

When Iraqi journalist Muntadhar al-Zaidi threw a shoe at US President George W Bush at a press conference in December 2008, he was arrested and sentenced to three years in prison. He was released after nine months in jail.

When Delhi journalist Jarnail Singh threw a shoe at Indian home minister P Chidambaram in April 2009, he was taken to the police station for questioning and released the same day; the release was reportedly on Chidambaram's orders.

Both shoe-throwers were motivated by their deep sense of hurt and pain at the suffering of their community and the way it was being ignored by the world. But in Jarnail Singh's case, I think the government was aware of the depth of feeling on it, and the decision not to press charges was as much a pragmatic one to avoid inflaming an important section of the electorate, as a humanitarian gesture of forgiveness by Chidambaram.

Singh was, of course, motivated by the lack of action on the massacre of Sikhs in 1984, and in particular on the clean chit given to Jagdish Tytler, one of the prime accused in those riots. He has now written a book, "I accuse", detailing those riots and the aftermath. I bought it intending to read it, but find I can't read more than a few paragraphs at a time: it is too stomach-churning. Nearly everyone who matters is guilty of the murder of 3000 Sikhs in 1984. The local Congress party leadership -- H K L Bhagat, Sajjan Kumar, Jagdish Tytler, and others -- for leading the violence. The Delhi police, not just for abdicating their responsibility but for actively abetting the rioters and, in many cases (as documented by Singh), actually restraining Sikhs who tried to defend themselves, and even arresting them for murder if they happened to kill a few rioters (from a mob of thousands) in self-defence. The home minister, P V Narasimha Rao, for abdicating his responsibility and not stepping in for two days. The new Prime Minister, Rajiv Gandhi, for apparently supporting the violence ("when a tree falls the earth shakes.") The President, Zail Singh, for his utter helplessness. The media for ignoring it all: the state-run TV and Radio switched over to mourning mode, and the newspapers, except for the Indian Express and Jansatta, reported the riots minimally or not at all; the Times of India had an editorial by Girilal Jain declaring that "this is the result of end of patience on the part of the Hindus." (Where else have we heard that recently?)

But one person who was not to blame for those events is Chidambaram (as Khushwant Singh points out in his foreword to the book). And, as Singh documents, the stone-throwing incident seemed to provoke some genuine expressions of contrition, and action, on the part of the ruling Congress party. In particular, Tytler and Sajjan Kumar were made to withdraw their candidatures from the upcoming Parliamentary elections.

Even earlier, after the Congress party returned to power in 2004, both Sonia Gandhi and Rahul Gandhi had made statements condemning the violence, while Prime Minister Manmohan Singh had said in Parliament that the violence of 1984 was a blot on the forehead of the country, and that he hung his head in shame for it. These and other gestures, belated though they were, had been welcomed by the Sikh community -- in fact, Sonia Gandhi's support for a Sikh Prime Minister was itself a significant gesture; but these seemed to be belied by the renewed patronage of Tytler and Kumar, Tytler's exoneration by the CBI, and suggestions that it was a "closed chapter" and "the wounds have healed".

Jarnail Singh's shoe-throwing incident was to show that the wounds hadn't healed. Chidambaram's instant forgiveness was, I think, an acknowledgement of the still-open wounds. And now Singh's book serves to remind us that, to this day, nobody has been held accountable for the horrific crimes that he details.

What about the open wounds from the Bush-Blair invasion of Iraq in 2003? Perhaps that's for people in other countries to worry about.

A must-read column in the Jamaica Observer, by John Maxwell.

And how utterly repugnant to see the two countries, the USA and France, that are responsible for Haiti's plight, squabble now about the relief efforts.
Posted by Rahul Siddharthan at 7:52 pm 3 comments:

More obnoxious even than Pat Robertson's attribution of the Haiti earthquake to their alleged devil worship is David Brooks' NYT article arguing, essentially, that Haiti's poverty is its own fault and aid is useless. More obnoxious because Brooks is supposed to be an "intellectual" writing in the pages of a respected newspaper.

Matt Taibbi, in his usual style, gives Brooks the treatment he deserves. But Taibbi, in turn, fails to tell us the real reasons Haiti is poor.

Meanwhile, they need our help... 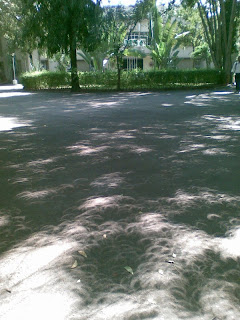 Yet more on poetry

I was going to write a long post on my thoughts on poetry, then I realised I'd done it before (and sparked one of my longest-ever discussions).

The motivation last time was some superficially amusing but ultimately mediocre poetry by a Union minister. This time the motivation was Anindita's reflections on appropriate criticism of work that one doesn't like; and the motivation for that was a particular poem that she didn't like, and her attempts to say so without sounding mean or nasty. (In fact, I quite liked that poem and, it turns out, at least one published poet likes it too. But it would be boring if everyone agreed on everything.)

I have a lot of thoughts on the subject, and also on analogies in science, but I went into some of that in comments to my previous post as well as new comments on Anindita's; I may yet expand on them in a new one.

Anyway, the discussion on Anindita's blog is getting interesting, especially how two different published poets (she and Vivek Narayanan) each see a published poem so differently. (And at least two other poets are commenters there, with interesting thoughts on the criticism process.) Go read it if you're interested in such things.

Posted by Rahul Siddharthan at 4:40 pm No comments:

We have the expressways, but what about the pedestrians?

I have driven from Chennai to Bangalore and back several times in the past few years, including 3 times in 2009. In my aging car, far from the fastest on the road, the one-way trip takes around 6 hours -- but about a third of that time is spent within the two cities. It takes barely four hours to go from Poonamallee, on the outskirts of Chennai, to Electronic City, on the outskirts of Bangalore, thanks to the new four-lane expressway, part of the "golden quadrilateral" project initiated by former prime minister A B Vajpayee. Some of the cars that pass me on the drive are, I am sure, doing over 150 kmph -- they probably take under 3 hours to travel between the two suburbs.

I called it an expressway, but that is a severe misnomer. At very few points is it elevated: nearly all crossings are on the surface, meaning you had better slow down as you approach them (though very few drivers do) -- and you had better be extremely cautious if you actually want to cross that road. There are several small towns and villages en route, and I wonder what life is like for their residents, especially the elderly and infirm among them. It cannot be fun crossing a 4-lane expressway, with 100+ kmph traffic, on foot when you are over 80 years old. Why couldn't elevated roads have been built across inhabited areas (as it is at Vellore, the largest town on the route)? The cost is certainly more, but what about the human lives saved?

It is the same story near where I work: the road once called "Canal bank road", now called "Rajiv Gandhi Salai", and informally called the "IT corridor", is a 4-lane road that, for an over 2 km stretch between the Madhya Kailash and Tidel Park intersections (well within city limits), does not have a single traffic light. Traffic routinely goes at 80kmph on this stretch, and I am sure some vehicles do well over 100kmph. The powers that be eventually, after much protest, installed some pedestrian overbridges, but it is far too little. Whose bright idea was it to have an "expressway" at surface level in the middle of the city? Worse, an important hospital, the Voluntary Health Services (that caters mainly to the poor and less-affluent sections of society), is situated near the beginning of the road, but on the "wrong" side for people coming from central Chennai -- so they are forced to take a 4km detour, to the end of the road and back, to enter the hospital, adding to their travel costs.

Which brings me to two news items that intrigued me recently. The first is this article on the NICE expressway in Bangalore, and how recent protests from villagers have stalled traffic on it. Says the article,

The NICE peripheral road is turning into an anomaly of sorts as commuters are finding it difficult to traverse through the expressway. For a week now, traffic on the peripheral road stretches linking Mysore Road-Tumkur Road and Mysore Road-Bannerghatta Road have ground to a halt, what with farmers protesting against alleged excess land acquisition resorting to road blockades.

The Nandi Infrastructure Corridor Enterprise (NICE), meanwhile, is losing lakhs of rupees in the form of toll fees collected from the vehicles. The aggrieved company has shot off a letter to the state government demanding its intervention to resolve the issue.

Nasty villagers, blocking law-abiding, toll-paying car-owners from using the shiny new expressway in their SUVs and Volkswagen Jettas because "excess land" was acquired. How can an expressway be built without acquiring land? Don't we all know that expressways boost the local economy? What are they complaining about?

Well, deep inside this article (which is about a spat between Deve Gowda and Yeddyurappa, I find a different version of the protest: the villagers are "demanding that NICE build a bridge across the road in the wake of a recent accident involving a school bus".

How about demanding that expressways be built elevated over all villages, and with grade-separaters at all existing intersections? Or else, install a few traffic lights and stop calling it an expressway. This perversion of the word "expressway" is a fraud on the Indian people, and a deadly one. [Update 11/01: Sridhar points out in a comment that an "expressway" is only partially access-controlled and may have a few at-grade intersections, while a "freeway" has no at-grade intersections. But I don't think the term "partial control of access" applies to our expressways. They go right through towns, even medium-sized towns like Ambur on the Chennai-Bangalore road, effectively cutting them in two.]

If the villagers can get hold of a good lawyer, I think this would be PIL material -- by no means restricted to NICE.