Here's an amusing article on the latest potential terrorist item on airlines: cheese.

"Honestly, the four incidents described, with photos, sure sound suspicious to me...Honestly, if someone has a block of cheese with wires and a detonator – I want the FBI to be called in."

To which the writer says: 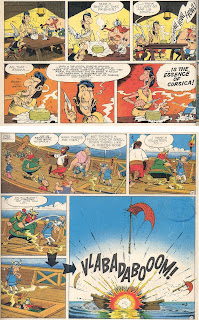 It is widely claimed, especially in the British and Australian press, that Simon Taufel is the world's best umpire.

Taufel was one of the field umpires (the other being Darrell Hair) who ruled Inzamam-ul-Haq run out when he left his crease to avoid a throw. Hair has, of course, since quit amid controversy over his calling off a Test between England and Pakistan after alleging ball tampering, and subsequently demanding money to retire. At the time, Taufel said Hair "knew the laws better than anyone"; Inzamam would beg to disagree.

And, today, Taufel has wrongly sent back Tendulkar and Ganguly -- both of whom were approaching centuries.

If these are the world's best umpires, we badly need more TV referrals, and should delegate all LBW decisions to HawkEye.
Posted by Rahul Siddharthan at 6:33 pm 2 comments:

Some time back I posted on the NCCS case, covered by Current Science in its June 10 issue; but removed those posts, for several reasons. One, I thought I was waffling: I had opinions but wasn't stating them. Two, I wanted to find out what others in the community think, and why the Padmanaban committee wrote the sort of letter it did. (However, my other webpage, that briefly reviews and illustrates the allegations, is still up.)

Subsequently, I have talked to several biologists, including (unexpectedly) two committee members; this helped me understand a little better what's going on. I also read Prof. Padmanaban's second letter on the subject, in the July 10 issue. Padmanaban starts by criticising Sohan Modak's language skills, goes on to question his motives, and reiterates as "fact" that "no manipulation is detectable".

My own (non-waffling) response will be posted here in a couple of weeks (though it already seems to be circulating privately). But the current issue of Current Science has further correspondence on the topic. P M Bhargava points out in forceful terms that if the committee were convinced by their conclusions, they should have shared the analysis with the journal that withdrew the paper; that they didn't do this is not good for their credibility. G R Desiraju has a terse comment that, unfortunately, sounds very true. P N Shankar discusses another, much higher-profile ethics case involving an Indian scientist (R A Mashelkar) and asks why Current Science hasn't covered it.
Posted by Rahul Siddharthan at 9:01 am No comments:

Several people have observed that Americans aren't really anti-war: they're anti-losing. Which explains the shortage of genuinely anti-war candidates, on all sides, in the run-up to next year's presidential election, despite the Iraq war being a disaster and Bush's ratings being in the toilet.

The exception is Ron Paul, from Bush's party and his home state (Texas). The oddity of a solidly anti-war libertarian running against "Rudy McRomney" has caused quite a buzz; he has appeared both on the Daily Show and on the Colbert Report in June. And now the New York Times has a long and informative feature on him and his ideas.

Extreme libertarianism of the kind Paul espouses seems a bizarrely unworkable idea. But increasingly in today's world one wonders -- well, I wonder -- whether every other system isn't worse. And at least some of Paul's ideas will find support on all sides of the political spectrum.
Posted by Rahul Siddharthan at 9:22 pm 13 comments:

In a few days it will be 40 years since John Coltrane died. The Guardian has a tribute.

Dave Brubeck is 86 and going strong. The BBC has just honoured him with a lifetime achievement award at their jazz awards.

It's rare that these two musicians are mentioned in the same breath. Coltrane was a hard-bop pioneer; Brubeck is a west-coast jazzman. Coltrane is a demigod among jazz (and, often, rock) musicians. Brubeck has always been hugely popular with the public, but always seemed to be taken less seriously in the New York-dominated jazz scene. And yet it seems to me they have much in common.

They both expanded the rhythmic and harmonic boundaries of jazz. Coltrane is perhaps best remembered for "Giant Steps", a "hurtling" composition, as the Guardian says, that "changes chords almost every beat". Brubeck is perhaps best known for the gimmicky Time Out album that explored odd metres. But long before that, he was pushing the limits of harmony too. Twentieth-century classical composers were writing "twelve-tone" music that didn't sound like music to most listeners: the twelve tones are not made equal, why should they be treated as equal? But Brubeck wrote "The Duke" (a tribute to Ellington) that casually explored all twelve chord roots within the first twelve bars, yet was consummately musical. (The best-known performance is by Miles Davis in his "Miles Ahead" album.) Brubeck explored challenging concepts of polyrhythm and polytonality while all the time remaining immensely popular with the public. Coltrane took chord substitutions to undreamt-of heights, again in a way that made sense to listeners.

I think these two musicians did what classical composers of the twentieth century unsuccessfully tried to: they broke all the traditional rules, but made music that people could listen to and relate to.

And yes -- they both recorded albums called "My Favorite Things", featuring completely contrasting takes on the Rodgers and Hammerstein tune. Coltrane's is regarded as a classic, Brubeck's is hard to obtain (I have a Japanese edition).
Posted by Rahul Siddharthan at 1:14 pm 3 comments:

Chocolate by any other name

Americans like to call pizza "pizza pie", and chocolate "candy" -- in both cases, it seems to me, because it's not the real thing.

Perhaps the word "candy" was well chosen. Until recently, Cadbury's (any version) could not legally be sold as "chocolate" in many European countries because it contains vegetable fat. Today, thanks to a 2000 European Commission "chocolate directive", it may be sold as "family milk chocolate". But in France, for example, you'll still find it (if available at all) in the candy section of supermarkets, not in the chocolate section.

The NYT article quotes Cadbury Schweppes as saying the local taste in different countries is determined by what "people grew up with"; in the US, that means Hershey. I wonder how they determined the taste in India.
Posted by Rahul Siddharthan at 9:30 pm No comments:

Posting has been slow, because of work and travelling. A few days ago I took my first Kingfisher flight. Before I flew, a friend in Bangalore told me that it's an excellent airline -- and never late, not even in crowded airports like Delhi. But there's always a first time. This flight was late by 45 minutes.

Like Paramount, Kingfisher does not advertise an "economy class". They have "first class" and "Kingfisher class" (Paramount has "business" instead of the latter). And as with Paramount, the only improvement I could discern over, say, Jet's economy class was leg room: it really is quite a bit more. But elbow room is much the same, and the food quality is good but not noticeably better than economy food in other airlines in this country.

But the most interesting difference was the in-flight magazine. Where other airlines offer articles on travel and tourism, Kingfisher offers a hundred or so pages of page-3 material. And the prime focus seems to be Dr Vijay Mallya himself. I counted at least a half-dozen photos of the great man, posing with a racing team, with politicians, with various others, and by himself, unfailingly referred to with doctoral prefix intact.

Dr Mallya's editorial mentioned their recent acquisition of a 26% stake in Air Deccan, and crowed that while Kingfisher had promised to be the country's largest airline by 2010, they had already managed it by 2007. I don't quite see how acquiring a minority stake equates to becoming the country's largest airline, but perhaps that's why I didn't go to business school.

But grabbing your attention at the outset was not Dr Mallya, but the man featured in the fawning cover story: Union civil aviation minister Praful Patel. In between hailing his contributions to the boom in India's airline industry, the article found the space to praise his dress sense (apparently he's his own fashion designer), his numerous educational institutions in his hometown, his twenty luxury cars, his self-assurance at cocktail parties, and his ability to be universally liked across party lines.

Perhaps the adulation is mutual. No doubt Kingfisher hopes so.

(Speaking of Dr Mallya: on my last trip to Bangalore I spent a pleasant couple of hours with a college friend at a bar on the top storey of the Barton Centre on M G Road, staring at the city's skyline. And in a south-westerly direction was a blot that I hadn't seen before: a complex of skyscrapers that included what looked very much like New York's Empire State Building, and nearby, another that somewhat resembled that city's Chrysler Building. I am told that for these latest additions to Bangalore's skyline, too, we have Dr Mallya to thank.)
Posted by Rahul Siddharthan at 11:39 pm 4 comments: