Much recent media attention has been showered on a recent paper by Bramwell et al, that observes the motion of "particles" in a solid that behave like carriers of "magnetic charge", or magnetic monopoles. This is an experimental confirmation of a theoretical prediction made by Castelnovo, Moessner and Sondhi nearly two years ago, and other recent experiments have added corroboration. The solid in question is an exotic rare-earth compound called dysprosium titanate.

Magnetic monopoles don't, as far as we know, exist in nature. There is no such thing as a "magnetic charge". An ordinary "bar magnet" behaves much the same way as an "electric dipole", that is, two electric charges placed close together, but if you break an electric dipole you get two electric charges ("monopoles") while if you break a bar magnet you get two bar magnets. This is because magnetism is not produced by static "magnetic charges" but is produced by moving electric charges (that is, currents). In an electromagnet, the the movement is of conducting electrons along a coiled conducting wire; in a bar magnet, the movement is the quantum-mechanical "angular momentum" of electrons, which is not very similar to classical "rotation" but has the same effect. In particular, electrons have an "intrinsic angular momentum" or "spin" that cannot be explained as an analogue of any classical quantity; but this spin, too, contributes to a magnetic dipole moment for each electron. Nuclei, too, can have their own magnetic dipole moments.

The recent experiments have not discovered a new phenomenon of nature -- the laws of physics don't need to be rewritten. What they have found is something that would behave exactly as a collection of magnetic monopoles would behave, if observed at not too fine a scale. The explanation is really quite simple. I myself worked on this system long ago: we published the basic physics of this compound in 1999 and, between then and 2008 (when Castelnovo and colleagues published their prediction), hundreds of papers on the subject have been published. I'm sure lots of those authors are kicking themselves for not having thought of it first.

These systems have a rather exotic geometry that has become widely known as the pyrochlore lattice, after an otherwise unrelated mineral. This is a lattice of tetrahedra (solids with four triangular faces) joined at their corners, such that two tetrahedra share a corner. Here is a picture (click on it for source page).

The dysprosium atoms (which are the main players here) sit at the red dots. Each carries a large magnetic moment arising mainly from electrons in the f shell. In free space, this magnetic moment could point everywhere, but in the presence of electrostatic fields of neighbouring atoms (in particular, the oxygen ions), it turns out that the preferred direction is along the lines joining the centres of the adjoining tetrahedra. Quantum-mechanically, the possible components of the angular momentum along this direction are discrete, and it turns out that the state where the angular momentum is entirely in this direction is about 200 kelvin lower in energy than other states. So at low temperatures (these experiments are performed at temperatures close to liquid helium, that is, less than ten kelvin), the atoms behave like magnets that point along the lines joining adjoining tetrahedral centres, in either direction. And because the angular momenta are relatively large, they can be treated as classical magnets. They interact primarily via the long-ranged "magnetostatic" interaction of two classical dipoles, but their nearest-neighbour interaction is somewhat reduced by a quantum-mechanical "superexchange" effect (but is still the dominant interaction).

And that is the only entry of quantum mechanics into this discussion. The physics henceforth is entirely classical and would have been understood in the 19th century, which is part of what makes it all so remarkable.

If the nearest-neighbour interaction were all, the "ground state" of these systems -- the lowest-energy state -- would be any state where each tetrahedron had two "magnets" (which we will call spins) pointing in and two pointing out. There is a macroscopic number of such states, leading to a non-zero entropy in the ground state (which is what we observed in 1999, and there is a remarkable analogy with the entropy of ice, which led to these systems being called "spin ice" -- but that is another story). Remarkably, the addition of long-ranged interactions does not seem to affect this picture much. Strictly speaking, the true ground state in the presence of long-ranged interactions is a fully-ordered state, unique apart from rotations. But experimental probes have only shown small signs of this form of ordering.

Since the three-dimensional lattice is hard to visualise, at this point let us consider instead a two-dimensional "square lattice", as shown below. 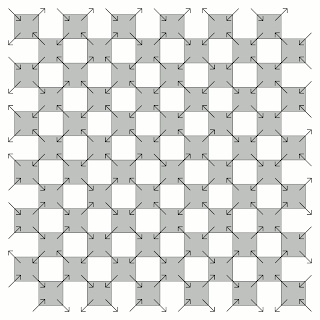 The constraint is that each shaded square must have two spins pointing in and two pointing out. This leads to results very much analogous to the pyrochlore case (in fact, this lattice, with all pairwise interactions within the shaded squares being of equal strength, is often called the "square pyrochlore" lattice). An example ground state satisfying this constraint is shown. Again, there is a large (macroscopic) number of such states.

Now how do we visualise excitations? The simplest excitation is a "spin flip" -- reversing the direction of a single arrow. This upsets the balance of arrows: one square has three arrows pointing in (with a net "north charge") and another has three arrows pointing out (with a net "south charge"). It is like placing a little magnet locally in an otherwise magnetically-neutral material. 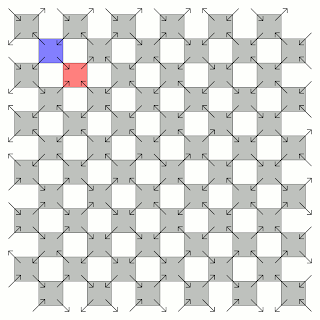 But the key point is that the "north charge" and "south charge" can now migrate and separate, via a series of spin flips. Click on the above figure for an animation.

Viewed on a coarse scale, what this looks like is two magnetic "monopoles" that can move around freely. Castelnovo et al. examined the dynamics of this process theoretically, and now Bramwell et al. have measured it in the laboratory.

It is a simple idea, and a remarkable experimental observation. Whether it is just a curiosity or has further scientific or technological importance, only time will tell.

It should once again be emphasised that these "monopoles" are not elementary particles. People familiar with semiconductors will think of an analogy with "particle-hole excitations", where a electron gets excited and leaves behind a positively-charged "hole" that behaves like a particle in its own right. But that is a quantum-mechanical phenomenon which cannot be understood classically. The magnetic "monopoles" here, however, are purely a phenomenon of classical physics. If you could build a model with wires, springs and magnets, designed to mimic the geometry of the system and enforce the constraints of the allowed magnet directions, it should behave in exactly the same way. That in itself is of interest: I'm not aware of any other examples of "quasiparticles" or "particle-hole excitations" that can be described purely classically.

Posted by Rahul Siddharthan at 12:11 am

A fascinating discovery! Recently, I've started learning differential geometry (in the context of GR) because it may have some interesting applications in my discipline, and I'm repeatedly amazed by the elegance and beauty of the mathematics. But help me understand why the physics is classical. If ground-state spin is the stuff of quantum jitters, and if these monopoles emerge due to spin flips, then are we saying that information is neatly conserved in these flips, and therefore, the mechanics is classical? As an aside - did you make it so one has to click for the animation, or is that a blogger constraint? I've been trying to upload animated images to blogger without success.

ws - by "classical" I mean one doesn't need to consider "superpositions of states", which is what gives quantum mechanics its distinctness. The spins are discrete in size and can point in only two directions each (and the reason for the direction constraint, as well as the correction to the intneraction, come from quantum mechanics). But once we accept the constraints and the interaction, the dynamics can be described by classical mechanics. Different spin states are not "mixed".

In contrast, if the interaction were what is called a "Heisenberg interaction" (a vector dot-product of spins which are free to point in any direction) and the spins were not large, the quantum mechanical states would not be states where spins had well-defined directions: they would be superpositions of such states.

About the animation, I didn't try directly uploading the animation -- I don't know if that works. (I know the preview doesn't show an animation but I don't know about the final result.) The animated gif is different from the image embedded in the post. It could be something to do with scaling the image when embedding it.