Women in the Tamil media

Here is the front page of today's Dina Malar: 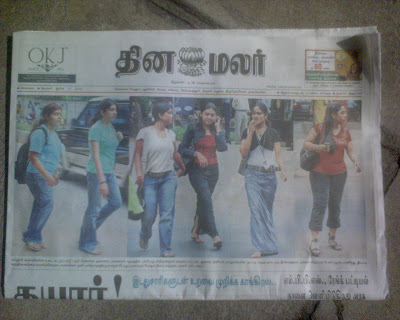 Why are these six young women the most important news of the day? According to the caption (translation courtesy my wife: my Tamil is rather bumpy), "Anna University in Chennai had introduced several regulations for dress restrictions for women college students. However, because private colleges have no such bans, female students dress up according to their wishes and breathe the free air. Who will the people side with if a situation were to arise where individual freedom were to clash with social responsibility?"

And there you have it: women who dress in western clothes (which are not remotely "revealing" -- a sari reveals much more bare skin, but is somehow OK) are socially irresponsible, and Dina Malar suggests that, if they are harassed, the people should pick sides based on this concept of social responsibility. And this is such an important issue that Dina Malar finds it appropriate to invade the privacy of six random, inoffensive-looking women and frontpage their photos.

This is a side of Chennai that English-speakers do not see, and may not even know exists. I'm not sure what it's like in other cities but I don't think it is quite this bad. (My wife wrote an article some years ago on the attitude of the Tamil media to women, and nothing has changed.)

And anyone who wants to take the caption at face value should note a few minor details: First, contrary to the suggestion in the caption, Anna University's dress code applies to both genders. Second, at least one of the women in the caption (the second from the right) is clearly not a student: her employee identity card is dangling around her neck. Third, private colleges in this city are hardly more laissez-faire than Anna University: see this medieval example.

Posted by Rahul Siddharthan at 11:21 am

The first thing I would like to ask that newspaper's editor is, "are you just trolling for readership?" Because, and I am assuming this, the editor of the newspaper must be upper middle-class and should know better than to make such utterly idiotic statements.

I say another four or five decades before this "western = bad" meme completely dies out in India.

Dina malar is plain nonsense. This particular news paper has some one named Anthumani who is supposedly against this kind of nonsense. But my guess is that it is he who gave this idea to increase the sales. Anyone reading his column in varamalar can easily see this.

I have no knowledge of this specific vernacular publication but in general the regional media in India is essentially a ragtag collection of sycophantic and appeasing snippets interpsed between adverts for aphrodisiacs and gemstones. They are sometimes very good with reporting hard news, usually when the owner has an axe to grind with whatever corrupt politician/public personality is being targeted. As for influencing public policy or opinion, they are usually content to parrot whatever line is popular with their readership because they know very well that any deviation will invite a sharp rebuke to their pocketbook. The only alternative to deal with this kind of nonsense becomes strict legislation and guarantees of civil liberties backed by police , the courts, and activist enforcement. For example, in Delhi and Madhya Pradesh the usual Shiv Sena anti-Valentine nonsense has been combated very effectively by the NSUI in the last couple of years. Similarly, the Gorkha nonsense is evoking a very sharp response from progressive forces in Siliguri. A sharp activist response will help carve out space for civil liberties. As for greater social change, it is always two steps forward and one step back till of course the day when we start to "let a hundred flowers bloom; let a hundred schools of thought contend" and continue with the inevitable

Manasi -- I don't know whether it would be "feeding the troll" to ask what you mean by "Gorkha nonsense", but other than that, I agree with you.

Anyways, (this might seem a bit off topic) an excerpt from some Chennai college: Rules Rules!!
(Got through Chennai metblog)
I wonder when will this moral policing stop!!

Vivek - actually I'd linked to the same "medieval example", above. Jeppiaar's practices are quite well known in Chennai, and are obviously supported by many parents.

This is the same paper that splashed a picture from a private party a few years ago.

Apparently, the management of the hotel where the party was held had (I am quoting The Hindu verbatim here) "complied with all rules laid down by the police, including shutting down before midnight and restricting entry to those below 21". And the photographer who shot those pictures had gate-crashed the party.