Some time back I wrote:

Yesterday, I saw policemen pulling up motorists in the wrong lane (seeking to go straight but standing in the left lane, which at that point is divided from the straight lane) and making them turn left instead. The resulting detour would certainly have cost them half an hour, given the jam at that junction, which would probably have hurt them more than a fine. I applaud the idea.

Today we were at the above intersection (the Thiruvanmiyur intersection on Lattice Bridge Road, Chennai), waiting to go straight, and this is what we saw: 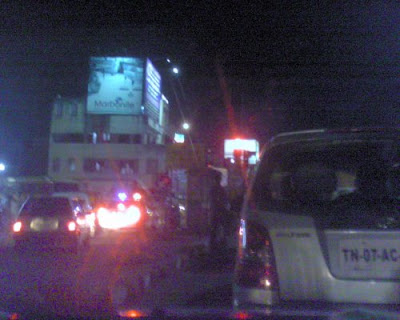 The row of stones in the middle is the divider I was talking about, and the brightly lit-up car ahead to the left of the divider is a police car (a white Hyundai Accent with brilliant tail lights and flashing red and blue lights on the roof), waiting to go straight -- that is, doing the exact same thing that the police were pulling up other cars for the other day. (There was a considerable queue in the straight lane, so the police car took the left lane to beat the queue. The other cars you see in the left lane are, in fact, turning left.)

Perhaps he was pursuing dangerous criminals -- or perhaps not. He waited patiently at the light, went straight when it turned green, and turned into a side road passing through a quiet, mainly residential area. We were taking the same route and ended up close behind. There were several people inside, who did not seem to be police officers. The space below the rear window was filled with what appeared to be shopping bags. After a while, the car turned off into a side road, so we don't know where he was headed; but it looked very much like a confirming instance of several recent reports that these shiny new cars (gifted to the police by Hyundai Motors some months ago) aren't being used for their intended purpose. And it annoys me when police drivers don't obey their own traffic rules.

In case someone with an interest is reading this: the car was TN01-G-3540 and the time was about 19:25, today, April 18. But I doubt the incident was an aberration.
Posted by Rahul Siddharthan at 11:38 pm